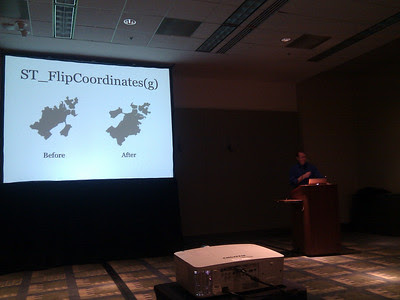 I just spent the week in DC speaking at FOSS4G-NA, or as I like to call it, "Fossforgna".  I came out at the invitation of the conference committee, and did a talk on "PostgreSQL 9.2 and Beyond" and a keynote on "Firehose Engineering", slides for both of which are located on our presentations page.  My "BOF" on Postgres peformance was less successful, because the attendees brought really hard problems.  Here's a heads-up: PostGIS desperately needs parallel query support.

The big news, of course, is the release of PostGIS 2.0.  I also saw excellent talks by: CartoDB (Maps-as-a-service, running on PostGIS); Metropolitan Airports Commission (flight tracking using PostGIS and PL/R); the British Anarctic Survey (tracking pack ice with PostGIS); NOAA's mapping system for international emergencies (especially poignant on Tuesday).  There were multiple talks about using opengeo stacks with PostGIS for various forms of ecological and biological tracking, including ocean floor diversity, deforestation, and endangered species tracking.  Just overall, really cool stuff which makes me proud to have done a very small part in helping enable it.

The hallway track was also very busy and I met a lot of people I never knew were using PostGIS before.

There were somewhere between 300 and 400 people at FOSS4GNA, and with only a couple of exceptions, every single one was using PostGIS.  The conference really brought home to me that PostGIS users probably now make up the majority of the PostgreSQL user base, and us folks in "mainstream" PostgreSQL ought to be paying more attention to that.  While PostgreSQL is a highly competitive relational database, PostGIS is the unquestioned first choice for GIS applications.

In any case, a terrific conference for open source geospatial application developers of all kinds, and a great opportunity to make business contacts in the opengeo world.  I recommend attending the next Fossforgna next year.
Posted by Josh Berkus at 7:37 PM